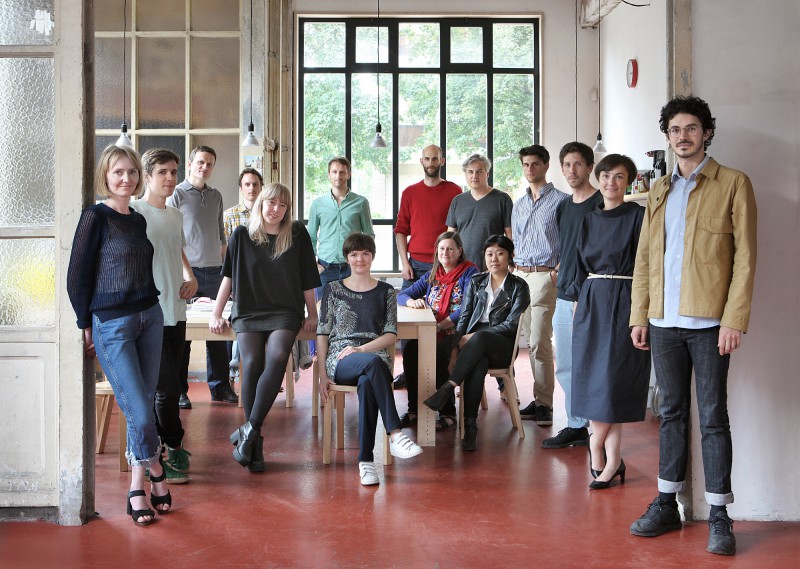 filip dujardin
noAarchitecten was founded by An Fonteyne, Jitse van den Berg and Philippe Viérin in 1999 and is based in Belgium, both in Brussels and Bruges.
Since the start noAarchitecten has been involved in a variety of projects at different scales.
From early on the practice has had the chance to concentrate on public buildings dealing with complex programmes in historical city centres. It was the sensitivity shown in their buildings that gained them the reputation as a serious partner for complex architectural commissions in difficult, often historical and protected areas.

For noAarchitecten there is no strict line between the past and the present. We believe a city is a continuous process and see architecture as a perfect mediator between different periods. The result should always have an independent existence that does not reflect the process or the many rules and restrictions encountered during the design and construction phases.
Thinking about sustainability is not restricted to the environmental and economic aspects. We believe that the overall quality of a building ensures mental and physical appreciation from a wide range of people, whether they are users, visitors or passers-by. When a building is capable of becoming a positive part of the collective memory of a city, people will care about it and respect it.

A number of recent publications and exhibitions have expressed great appreciation for the sobriety, layering and social and historical relevance in the work of noAarchitecten. They are invited to lecture internationally on their work and participate as guest critics at several universities, as well as being members of the jury for competitions.

The practice consists of a dynamic and international team of 15 architects with a broad experience.

The main office is an open studio in a 1930s factory building in central Brussels, which the practice converted to studio use for themselves.

noAarchitecten is accustomed to work on public projects and is used to communicate about the work both internally to the client and other participants, and externally to stakeholders and the media.

noAarchitecten is used to act as a general contractor for the total design team and coordinates the spatial integration of technical and structural requirements as well as the overall planning in the design phase.

The three partners An Fonteyne, Jitse van den Berg and Philippe Vierin are closely involved in the design of all projects, with at least one of the partners attending all client meetings and leading the project together with an architect project leader. The appreciation for the work of noAarchitecten is the result of a strong synergetic cooperation between the complementary leading architects working together in all phases of a project.